Here in 1992, we present the fabulous what’s the Scenario remix
Where as there are 7 MCs.
Six which are in physical form, one which is in spiritual essence
And he goes by the name of, uh…HOOD!

Check the rhyme, punk that ass again, god
‘F’ it (S—-T!!) ! I lay buckshots
Hood, madman, I rip up stages
Lay down in your wages, I’m wild like Larry Davis
Extra, extra, pick up a clip. I’ll tear (that) ass out the frame (HUH!)
And grab my d–k(OH!)
I’m a rockem sockem robot,kid I drop bombs
I’m rugged and deadly, so I shit on the petty
I’m baseball bat a bastard, I’m bad news
I’m crazy and clever, cut does your crews
Death on the phono, my skills are dolo
You say ‘oh no’, you b—h a-s h–o
I bag up waste, electrifying, I’m primetime
I slaughter slime, I’m the greatest of all time
Sick ass brotha, nasty ass n—a
Pump slugs in your face and dump that ass in the river
Two tears in a bucket, f–k it, kick the can (SAY WHAT, SAY WHAT!!!)
I’m a bad, bad man

Quick is how I flip from the tip of the lip
Punchin out hits like Gladys Knight and the Pips
The 5 foot assassin has just raided your area
Your cutty rhymes are wack and that’s the reason I ain’t hearin ya (SO!)
Pull out the red carpet cuz I’m gettin this
Vanilla Ice platinum? That shit’s ridiculous
Excuse my Fresh, but profanity is all I knew
And to you other sellouts, oh yeah, ‘F’ you too
And let it be known, I’m not the one to step to
You better off callin D-Nice to your rescue
Freestyle fanatic, probably the best around
As for corny MCs, like Chuck D, I ‘Shut ‘Em Down’
The Artical Don of hip-hop and I won’t stop
The 5 foot assassin has come to wreck ’nuff shop
So do like Michael Jackson and ‘Remember the TIme'(DO YOU REMEMBER?)
Put on your dancin chose or somethin sho’ can’t rhyme

Makin moves y’all (MOVES Y’ALL!)
On and on and on (CHECKA, CHECK IT OUT!!!)
To the breaka, breakadawn (WHO’S THAT?!?)
Just, one of the LONS and A Tribe Called Quest
(EAST COAST!) to West
Remixed mad kick more than Metallica
Tall emcees for like the Battlestar Gallactica
Stampin, stompin, rompin Compton
(PEOPLE ALL OVER THE WORLD!!!) I’m promptin (STYLE!)
Pick a style, any style, Strong Isle
Representation, sensationalization
Scenario for the radio, BLS and KISS, so
(HERE WE GO, YO!) Yeah
Force, Main Source LP on the rise
In Living Color was seen through original eyes
And I’m out like shout, Ooh Ahh, Ooh Ahh
(OOH AHH, OOH AHH!) There it is baby par

Vine, limb on a limb, slim trim
P I M, there I am (THERE I AM!)
Don’t run from a blim
Sight be be right, be polite for my mice like a Mike
SEE SICK, SEE SYKE
And slip away and off to the Poconos
Spot pick the flows, mike swing a pretty pose
Yamaha (YAY-HA-MAY!)
Let’s split the funk, now it all sounds (HEY!)
And nuff enough, misfitted I’m with it
If I did it, I was blitted and probably shouldn’t have quit
Cuz yo, my corporate status at Knight like Gladys
bed rest spread tests and yo, I’m like the maddest
Male, not female, hail from Uniondale
Bounce the b-ball cuz beats are bein yelled
In the hallway is always draggin with a HO!
This is my 2 times 9 on the Scenario

Check it out everybody, rhymes and mics
Black mens gettin loot, DOIN WHAT THEY LIKE!
Eight black brothas in the public eye
If you listen very close, I will tell you why
HOOD!, Phife, Milo, Dinco and C. Brown
Shaheed, myself and Busta Bust Brown
Will commence to rock (ROCK!), so bring on the flocks (FLOCKS!)
Interrogation for the knockin out the box
The boom-box ruler controls the medula
None come cooler, I win like Shula
So bust out the moves as you start to pursue her
Intensified mind, non blunt consumer
Tip will come booty (WELL, IT’S ONLY A RUMOR!)
The meaning so deep, that it starts brain tumors (TUMORS!)
Peace to Hood baby from the midnight crooner
Smoke him up later, if not, then sooner

Hey what we gon DO! in ’92, even though we had FUN! in ’91
Quick to fill my day, earn beans comin down
from the from the new sound, leavin cracks in the ground
What’s goin on my man (GOD DAMN!) and now my brain is hurtin
It’s enough, Busta, rhythm will hit ’em, then I get ’em
Rip on ’em, shit on ’em, hit on ’em, then I will sit on ’em
Open up your mouth if you want the food
So get loot, Flipmode, cuz I’m in the mood, Uh-heh, uh-heh
Yeah man, that’s how it goes
Body drippin of top blood comin out your nose
Give me your band-aid, what are you askin for? (MORE!)
All in your secret and pure
Adverse, they said, check it and I bust a new rap
Rhymes, Busta Rhymes, and bust this wicked rhymes
Yeah y’all in ’92, I’m packin my roach spray (ANYWAY!)
Tickle it, Tribe Called Quest, Leaders of the New School
Mad brothas would still think…Rhow, Rhow, Rhow!!!
To my dragon, baby, stop whining
I see my influence still shining
More crazy in ’92, uh oh, time to go, yo
That’s the Scenario! 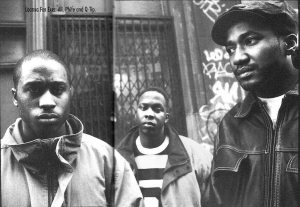