MEMPHIS, Tenn. — Relatives and friends of Lorenzen Wright gathered Wednesday and grieved for the former NBA player who has been missing for 10 days, as police investigated the discovery of a man’s body outside of Memphis.

Wright’s uncle, Curtis Wright, told The Associated Press that police called the player’s father, Herb Wright, on Wednesday afternoon with the news he had died.

Sgt. Alyssa Macon-Moore of the Memphis Police Department wrote in an e-mail to the AP that police were investigating the death of an unidentified man beside a wooded area about 15 miles south of downtown Memphis. Asked if the man was Wright, she wrote they could not confirm the victim’s identity Wednesday night.

The family issued a statement through a cousin of Lorenzen Wright, Camella Logan: “Lorenzen’s family has come together to mourn his loss and honor his legacy. We appreciate your thoughts, prayers and condolences as they are comforting at this very difficult time. Additionally, we ask that you please respect our privacy as we try to cope with his sudden loss.”

Wright’s mother, Deborah Marion, arrived at the scene Wednesday night with a handful of family members. She crossed the crime scene tape and tried to talk to police when she was told to move back. She sat in a TV van before returning to the tape. Two officers then let her through.

The distraught Marion then started running down the road toward the crime scene before being stopped by an officer. She spoke with officers and then walked back past reporters without speaking straight to a van.

The 34-year-old Wright was last seen July 18 when he was expected to fly out of town. His family filed a missing person report July 22.

Wright played 13 years in the NBA for the Los Angeles Clippers, Atlanta Hawks, Memphis Grizzlies, Sacramento Kings and most recently the Cleveland Cavaliers with 17 games in the 2008-09 season. Wright left the University of Memphis early for the NBA, and the Clippers made him a lottery pick with the No. 7 selection overall.

By nightfall, nearly 200 people had visited the road blocked off by police while TV news helicopters showed investigators scouring the grounds for evidence. Police brought in a mobile command center that further blocked off the scene.

Former NBA star Penny Hardaway, who played at Memphis two years before Wright, said he heard the news from a friend and went to the scene near where the body was found.

“I cried. The emotions hit me immediately. It’s just sad because we lost a good person and a brother,” Hardaway said.

Elliot Perry, another friend and former Memphis player, was also at the scene. Wendy Wilson, who once worked as Wright’s personal assistant, was also there and said Wright often used the road police had cordoned off as a shortcut to his mother’s house.

“He was a good person. He did not deserve to die this way. God is not pleased with this,” Wilson said.

Grizzlies majority owner Michael Heisley issued a statement late Wednesday, saying: “We are deeply saddened by the tragic death of Lorenzen Wright. We lost a member of the Grizzlies family. Lorenzen delighted fans on the court with his passion and off the court with his generosity in a Memphis community that watched him grow throughout his playing career …”

Copyright 2010 by The Associated Press 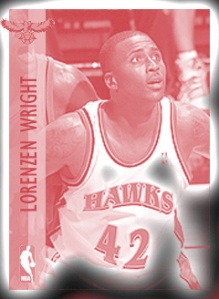