MIKE G:
For the lap Jimbrowski must wear a cap
Just in case the young girl likes to clap
Ain’t for the wind but before I begin
I initiate the buddy with a slap
Q-TIP:
Now for the next
I’m the Q-Tip from A Tribe Called Quest
And when I quest for the buddy I don’t fess
For my jimmy wants nothin’ but the best (the best)
The best (Ooh Wee!)
Let’s stick out jimmy and see what we can catch
(Stick em up, stick em up jimmy)
Next won’t be needed unless
(Jenny want to get right to the flesh)
(Sweet little woman, sweet little woman)
POS:
I won’t lie, I love be -you-D-D-why (why)
Cause I never let it walk on by
When it comes to me and Jenny I seem (very serious)
Like a big friend
Buddy is the act that occurs on the lip
when Jenny and jimmy start shootin’ the gift
Boy let me get shot I won’t even riff
AFRIKA:
Buddy buddy don’t you know you make me go nutty
I’m so glad that you’re not a fuddy duddy
Not too skinny and not too chubby
Soft like silly putty
Miss Crabtree I hope that you’re not mad at me
Cause I told you that it was your buddy
That was making me ever so horny
Junglelistically horny
DOVE:
On the dial my buddy talks to me for a while
Plug Two is the
Q-TIP:
Q to her tip
DOVE:
On the A side and sometimes the flip
(Gotta gotta flip this record)
Buddy is the bud to my daisy tree
And the luuden to my do-re-mi
And the pleaser to my man Plug 3
(Plug 3 gets all the buddy)
MIKE G:
Behind my bush my buddy likes the way that I push
And like a champ just knock it on out
Never ever once sellin’ out
(Oh let loose the juice)
My buddy helps me to
(De La my Soul)
Keepin’ jimmy in total control
Without Buddy I’d be on a roll
(La la la l-la la la la, la la la l-la la la la)
Q-TIP:
Hey girl I heard ya lookin’ for some good times
If you Quest from the Soul here’s what we’ll find
A whole lot of fun lots of fun together
Just like kissin’ cousins (yeah that’s kinda clever)
Close like bosoms, bosoms stay close
If you be my buddy I will toast
That we’re like Ethel Merts and Lucille MacGillicuddy
You can be mines and I can be your buddy
DOVE:
The best buddy’s in evening wear
Long lovin’ less Tru know (he’s in there)
I feel sorry for those who pay a fare (a fee) word to the D
I don’t beg I just tease my buddy with my right leg
And when it’s ready what’s said is buddy is best in bed
AFRIKA:
Fly buddy told us all to get into a circle
Said don’t worry cause I won’t hurt you
All I really want to do is freak you (she freaked us)
MIKE G:
And I watched and then I checked my swatch
To see the time
The Soul had formed a buddy line
And that buddy was (mine all mine)
POS:
Now when Tribe, the Jungle, and De La Soul
Is at the clubs our ritual unfolds
Grab our bones and start swingin’ our hands
(Then Jenny start flockin’ it everywhere)
Cause Jenifa just wants to stay aware
Yo fellas should we keep her aware
(Mmm Hmm, yeah!!!) 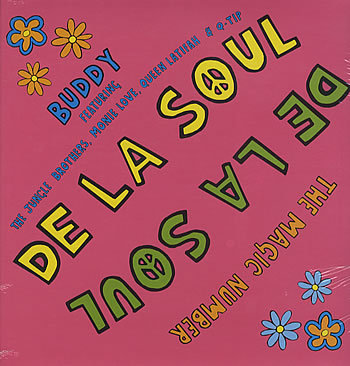