You wanna front what?
Jump up and get bucked
If you’re feeling lucky duck
Then press your luck
I snatch fake gangsta MC’s and make em f—–t flambé
Your nine spray my mind spray
Malignant mist steadily pumps the funk
The results you’re a gang stuffed in a car trunk
You couldn’t come to the jungles of the East poppin that game
You won’t survive get live catchin wreck is our thing
I don’t gang bang or shoot out bang bang
The relentless lyrics the only dope I slang
I’m a true master you can check my credentials
Cuz I choose to use my infinite potentials
Got a freaky, freaky, freaky-freaky flow
Control the mic like fidel castro locked cuba
So deep that you can scuba dive/my jive
Origin is unknown like the Jubas
I’ve accumulated honies all across the map
Cuz I’d rather bust a nut then bust a cap in
Ya back in fact my rap snaps ya sacroilliac
I’m the mack so i don’t need to tote a Mac
My attack is purely mental and its nature’s not hate
It’s meant to wake ya up out of ya brainwashed state
Stagnate nonsense but if you persist
You’ll get ya snotbox bust you press up on this
I flip hoes dip none of the real n—as slip
You don’t know enough math to count the mics that I ripped
Keep the Dirty Rotten Scoundrel as his verbal weapons spit

Real rough and rugged, shine like a gold nugget
Every time I pick up the microphone I drug it
Unplug it on chumps with the gangsta babble
Leave your nines at home and bring your skills to the battle
You're rattlin' on and on and ain't sayin nothing
That's why you got snuffed when you bump heads with Dirty Rotten
Have you forgotten, I’ll tap you [jaw]
I also kick like kung-Fu flicks by run run shaw
Made frauds bleed every time I g'd
Cuz I’ve perfected my drunken style like Sam seed
Pseudo psychos I play like Michael
Jackson when I’m bustin ass and breakin backs
Inhale the putrefied aroma
Breathe too deep and you'll wind up coma-
tose the king I’m hard like a fifth of vodka
And bring your clique cuz I’m a hard rock knocka
I gotcha, out on a limb I’m about to push you off the brink
Let you draw your craw but you burnin' shot breaks
When the East is in the house you should come equipped 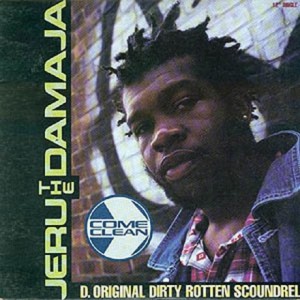