I love the rhyme scheme of this piece. My piece “Ending Is Just Another Word For Goodbye” enlists this scheme.

I.
My first thought was, he lied in every word,
That hoary cripple, with malicious eye
Askance to watch the workings of his lie
On mine, and mouth scarce able to afford
Suppression of the glee, that pursed and scored
Its edge, at one more victim gained thereby.

II.
What else should he be set for, with his staff?
What, save to waylay with his lies, ensnare
All travelers who might find him posted there,
And ask the road? I guessed what skull-like laugh
Would break, what crutch ’gin write my epitaph
For pastime in the dusty thoroughfare.

III.
If at his counsel I should turn aside
Into that ominous tract which, all agree,
Hides the Dark Tower. Yet acquiescently
I did turn as he pointed, neither pride
Now hope rekindling at the end descried,
So much as gladness that some end might be.

IV.
For, what with my whole world-wide wandering,
What with my search drawn out through years, my hope
Dwindled into a ghost not fit to cope
With that obstreperous joy success would bring,
I hardly tried now to rebuke the spring
My heart made, finding failure in its scope.

V.
As when a sick man very near to death
Seems dead indeed, and feels begin and end
The tears and takes the farewell of each friend,
And hears one bit the other go, draw breath
Freelier outside, (‘since all is o’er,’ he saith
And the blow fallen no grieving can amend;’)

VI.
When some discuss if near the other graves
be room enough for this, and when a day
Suits best for carrying the corpse away,
With care about the banners, scarves and staves
And still the man hears all, and only craves
He may not shame such tender love and stay.

VII.
Thus, I had so long suffered in this quest,
Heard failure prophesied so oft, been writ
So many times among ’The Band’ to wit,
The knights who to the Dark Tower’s search addressed
Their steps – that just to fail as they, seemed best,
And all the doubt was now – should I be fit?

VIII.
So, quiet as despair I turned from him,
That hateful cripple, out of his highway
Into the path he pointed. All the day
Had been a dreary one at best, and dim
Was settling to its close, yet shot one grim
Red leer to see the plain catch its estray.

IX.
For mark! No sooner was I fairly found
Pledged to the plain, after a pace or two,
Than, pausing to throw backwards a last view
O’er the safe road, ’twas gone; grey plain all round;
Nothing but plain to the horizon’s bound.
I might go on, naught else remained to do.

X.
So on I went. I think I never saw
Such starved ignoble nature; nothing throve:
For flowers – as well expect a cedar grove!
But cockle, spurge, according to their law
Might propagate their kind with none to awe,
You’d think; a burr had been a treasure trove.

XI.
No! penury, inertness and grimace,
In some strange sort, were the land’s portion. ‘See
Or shut your eyes,’ said Nature peevishly,
It nothing skills: I cannot help my case:
’Tis the Last Judgement’s fire must cure this place
Calcine its clods and set my prisoners free.’

XII.
If there pushed any ragged thistle-stalk
Above its mates, the head was chopped, the bents
Were jealous else. What made those holes and rents
In the dock’s harsh swarth leaves, bruised as to baulk
All hope of greenness? Tis a brute must walk
Pashing their life out, with a brute’s intents.

XIII.
As for the grass, it grew as scant as hair
In leprosy; thin dry blades pricked the mud
Which underneath looked kneaded up with blood.
One stiff blind horse, his every bone a-stare,
Stood stupified, however he came there:
Thrust out past service from the devil’s stud!

XIV.
Alive? he might be dead for aught I knew,
With that red gaunt and colloped neck a-strain.
And shut eyes underneath the rusty mane;
Seldom went such grotesqueness with such woe;
I never saw a brute I hated so;
He must be wicked to deserve such pain.

XV.
I shut my eyes and turned them on my heart,
As a man calls for wine before he fights,
I asked one draught of earlier, happier sights,
Ere fitly I could hope to play my part.
Think first, fight afterwards, the soldier’s art:
One taste of the old time sets all to rights.

XVI.
Not it! I fancied Cuthbert’s reddening face
Beneath its garniture of curly gold,
Dear fellow, till I almost felt him fold
An arm to mine to fix me to the place,
The way he used. Alas, one night’s disgrace!
Out went my heart’s new fire and left it cold.

XVII.
Giles then, the soul of honour – there he stands
Frank as ten years ago when knighted first,
What honest man should dare (he said) he durst.
Good – but the scene shifts – faugh! what hangman hands
Pin to his breast a parchment? His own bands
Read it. Poor traitor, spit upon and curst!

XVIII.
Better this present than a past like that:
Back therefore to my darkening path again!
No sound, no sight as far as eye could strain.
Will the night send a howlet or a bat?
I asked: when something on the dismal flat
Came to arrest my thoughts and change their train.

XIX.
A sudden little river crossed my path
As unexpected as a serpent comes.
No sluggish tide congenial to the glooms;
This, as it frothed by, might have been a bath
For the fiend’s glowing hoof – to see the wrath
Of its black eddy bespate with flakes and spumes.

XX.
So petty yet so spiteful! All along,
Low scrubby alders kneeled down over it;
Drenched willows flung them headlong in a fit
Of mute despair, a suicidal throng:
The river which had done them all the wrong,
Whate’er that was, rolled by, deterred no whit.

XXI.
Which, while I forded – good saints, how I feared
To set my foot upon a dead man’s cheek,
Each step, of feel the spear I thrust to seek
For hollows, tangled in his hair or beard!
– It may have been a water-rat I speared,
But, ugh! it sounded like a baby’s shriek.

XXII.
Glad was I when I reached the other bank.
Now for a better country. Vain presage!
Who were the strugglers, what war did they wage,
Whose savage trample thus could pad the dank
soil to a plash? Toads in a poisoned tank
Or wild cats in a red-hot iron cage –

XXIII.
The fight must so have seemed in that fell cirque,
What penned them there, with all the plain to choose?
No footprint leading to that horrid mews,
None out of it. Mad brewage set to work
Their brains, no doubt, like galley-slaves the Turk
Pits for his pastime, Christians against Jews.

XXIV.
And more than that – a furlong on – why, there!
What bad use was that engine for, that wheel,
Or brake, not wheel – that harrow fit to reel
Men’s bodies out like silk? With all the air
Of Tophet’s tool, on earth left unaware
Or brought to sharpen its rusty teeth of steel.

XXV.
Then came a bit of stubbed ground, once a wood,
Next a marsh it would seem, and now mere earth
Desperate and done with; (so a fool finds mirth,
Makes a thing and then mars it, till his mood
Changes and off he goes!) within a rood –
Bog, clay and rubble, sand, and stark black dearth.

XXVI.
Now blotches rankling, coloured gay and grim,
Now patches where some leanness of the soil’s
Broke into moss, or substances like boils;
Then came some palsied oak, a cleft in him
Like a distorted mouth that splits its rim
Gaping at death, and dies while it recoils.

XXVII.
And just as far as ever from the end!
Naught in the distance but the evening, naught
To point my footstep further! At the thought,
A great black bird, Apollyon’s bosom friend,
Sailed past, not best his wide wing dragon-penned
That brushed my cap – perchance the guide I sought.

XXVIII.
For, looking up, aware I somehow grew,
’Spite of the dusk, the plain had given place
All round to mountains – with such name to grace
Mere ugly heights and heaps now stolen in view.
How thus they had surprised me – solve it, you!
How to get from them was no clearer case.

XXIX.
Yet half I seemed to recognise some trick
Of mischief happened to me, God knows when –
In a bad dream perhaps. Here ended, then
Progress this way. When, in the very nick
Of giving up, one time more, came a click
As when a trap shuts – you’re inside the den.

XXXI.
What in the midst lay but the Tower itself?
The round squat turret, blind as the fool’s heart,
Built of brown stone, without a counterpart
In the whole world. The tempest’s mocking elf
Points to the shipman thus the unseen shelf
He strikes on, only when the timbers start.

XXXII.
Not see? because of night perhaps? – why day
Came back again for that! before it left
The dying sunset kindled through a cleft:
The hills, like giants at a hunting, lay,
Chin upon hand, to see the game at bay, –
’Now stab and end the creature – to the heft!’

XXXIII.
Not hear? When noise was everywhere! it tolled
Increasing like a bell. Names in my ears
Of all the lost adventurers, my peers –
How such a one was strong, and such was bold,
And such was fortunate, yet each of old
Lost, lost! one moment knelled the woe of years.

XXXIV.
There they stood, ranged along the hillsides, met
To view the last of me, a living frame
For one more picture! In a sheet of flame
I saw them and I knew them all. And yet
Dauntless the slug-horn to my lips I set,
And blew. ’Childe Roland to the Dark Tower came.’ 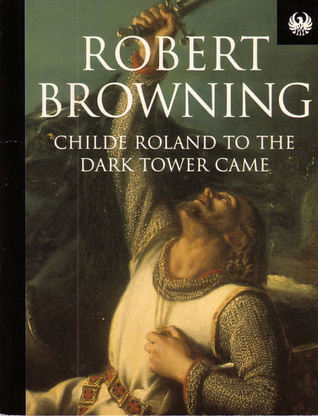