[Big Boi] Yeah.. ATLiens style on y’all ass
[K. Mike] DO OR DIE, AQUEMINI
[K. Mike] Killer Mike, Roc-A-Fella collaboration – holla!
[Y. Hova] Young Hov’ in the place to be
[Y. Hova] Big Boi in the place to be (Young)
[Y. Hova] Andre 3000 (cash) shout out to public housin (b—h)
[Y. Hova] I brought (holla) the whole hood with me
[Big Boi] You got red dirt in your afro
[Y. Hova] Young Hov’ in the place to be (yeah)
[Y. Hova] OutKast in the place to be (yeah)
[Verse One: Big Boi]
Did you ever think that you would be the n—a on the block
Didn’t have to break a steerin column, didn’t have to cook a rock
A damn goodie two-shoes, that what they call ya
Never judge a person or a book by it’s covers
Just because my tone is darker than yours, a little tanner
You never took the time out, examine yourself boi
.. are you black, white, asian?
Indonesian, or Borean – that’s black and Korean
We on the same team if we breathin
I jumped off the subject to see if you was seein
that we drop a little science off in every verse
They put that P.A. sticker on it cause they scared we gon’ curse
But the knowledge is the power, the cowards get devoured
Any hour, any cipher, any way to any height
Because I might just SNAP on a F–K-ass n—a
Might clap a cap at a sucka-ass n—a
In the meantime, Daddy Fatsacks gon’ chill out
He might just, pull out his pistol
and let that thang whistle at your windshield or your residence
Superman to Clark Kent, you better be way harder
than the park bench to start this
Marcus, Jason, my little brother James
All my brothers from my momma but Andre is just the same
Ain’t no uno, we a duo; deuce dos to a pair
A player stiffen the competition
Pressed like Levi’s and toughskins, one minus one
Negative one minus negative one is nothin
Bustin d-boy raps and player poems
The ‘Kast s–t ain’t plastic, we smash it and move the crowd
And rock the crowd original material while you bore ’em
Your live show consists of everybody’s s–t but you’re-uns
Do your own s–t! In your live show (bitin ass n—a)

[Verse Two: Big Boi]
Penelope Ann Cruz couldn’t snooze
with her +Eyes Wide Shut+, before I asked to hit her gut
If you brunette, +Legally Blonde+ I might respond
Take you to +Swan Lake+ and beyond
Antwan raps on, raps on, clap off clap on
I switch the flow so quick you cannot fa-thom
I take a submarine two thousand leagues below the sea
and try to grab one line or sentence
Rhyme repentance, find the illest lyricist
And give him a clean bill of health
Wealth might make you look good but you sound like s–t
And your team lookin s–tty to death

[Verse Three: Killer Mike]
My n—a Big Boi said, watch ’em as they gawk and they gander
You can follow or lead like Commander Picard
You can have +The Whole World+
Or be satisfied with the boulevard, overstand
this young player’s rhyme
I foregoed the crime and I focused on rhyme
Focused on every word, and line
Like a young Cassius Clay in his prime
I was born to talk s–t and prove mine, and I’m
the epitome of raw rhyme
Got signed, got serious about the craft
of raw rhyme and I got mine – Aquemini’s
murderous monster move minds
Did it so hard that it oughta be a crime
When you see I’m comin holla one-time, holla one-time
When you see I’m comin holla one-time (one-time)

[Interlude]
Don’t, you, like, to groove
In your hooptie on your old, flip, flop, sweatshoes
To run yo’ tennis shoes
Don’t, it, matter to you
That OutKast we got that slump for y’all
Keep that funk for y’all

[Verse Four: Jay-Z]
When I’m in the mood I rock the S Dot tennis shoes
At the interlude, I got the Gucci flip-flops
And I, fix it up like gin and juice when I’m them interviews
dudes wanna know what he copped
And where you got that, and how could they buy that
Where the million dollar watch at, stop that!
Why that, why this, n—az wanna hijack the flyness
I’m on a whole ‘nother plane
A whole different lane, a whole ‘nother game that I’m playin
Understand what I’m sayin
Hov’ and OutKast, whatchu think about that?
Really don’t matter though what you n—az chatter though
Anybody get out of line then you trust
that the mac’ll go b-r-r-r-r-ap, got you killed for that alone
Back on the s–t, back on the strip
Another hit I’m not gon’ miss
[Interlude] 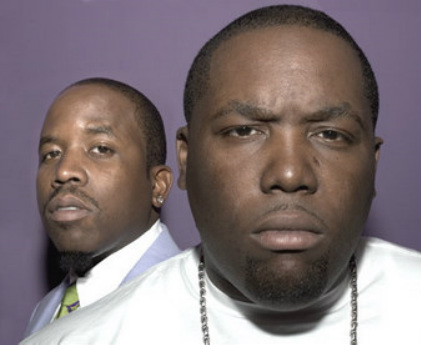