Most people do not realize that the “Gospel-esque” song “Closer,” performed by Maxwell, highlighted by MTV Unplugged, and his live shows, was actually a cover of Nine Inch Nails song with has appeared by official release under the the titles, “Closer,” and “Closer To God.” Also played in the opening credits of the 1995 film Se7en and the San Francisco Giants themed, The Fan. 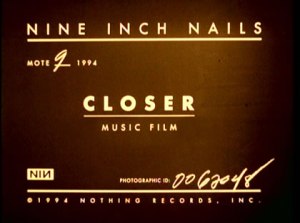