I remember getting my first cell phone (that I was actually paying for) it was designed for it’s legitimate purpose as pay phones began to disappear, it was a secondary venue of staying in contact. I was amazed by the clarity of the communication in 2000 with the SprintPCS network, and may my first foray.

It was the SCH-3500. Back then, other than the Motorola StarTAC, phones were “cool-ish” but may not have had a special name like a RAZR, iPhone, or Droid. It allowed for expensive communication (which limited my use), was bulky (I never really used it while driving), an d provided that extension of communication if needed. The phone was always visible, and my friends and I set up our weekends with them, dates, late night calls/rendezvous were set up what have you, but at that time, it was more a tool, than a necessary piece of life/culture at the time. I even had data during a free trial, and sent an e-mail which was one of the most inconvenient and cumbersome undertakings ever.

After a few years, I upgraded to the SCH-9500, a phone that was in a Dr. Dre music video at the time. Coincidently, the 3500 had been giving me problems and was replaced at least two times since purchase. This was provided as the replacement. It added no additional capabilities, just a more “dependable” updated phone. My communication habits grew, and it was a grew conduit for long-distance calls, rather than expensive calls from a land line. I called out of town a lot, what can I say? Plus the ability of the phone to become local when you traveled was great to keep a broke guys bill down.

Not really needing the phone to communicate as much, but wanting an updated look, again, a friend offered their phone. The blue display was a cool and different, but still, it was simply a phone. I didn’t need a hulking blue BlackBerry, a full keyboard or any of those things. I did not even text, I can’t remember if that was going on then. I began to call the BlackBerry (that was the only real Smart Phone at the time) a leash, because it kept you connected at all times, and I had no desire to be “connected.” I had long since deleted accounts in Black Planet (2000) and had no want/need/desire to be on sites like that again. I was fine/grounded/private. 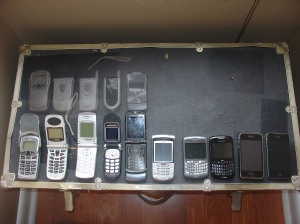