The first day I logged into social media, and created any profile was for my writing career. The main focus is my manuscript, Blue Lines.

Though it is not my manuscript Blue Lines, as of yet, I have finally published a piece that encompasses elements of my manuscript and the life and times, and experiences beyond. Many times I am nonplussed in my reactions, but I am happy that I did this.

I and nervous and proud of my electronic release of my collection of short and long form poems entitled, Under a Blue Sky: Selected Love Poems. It can be purchased in electronic form on Amazon.com.

Thank you for your support over the years, and your continued support. 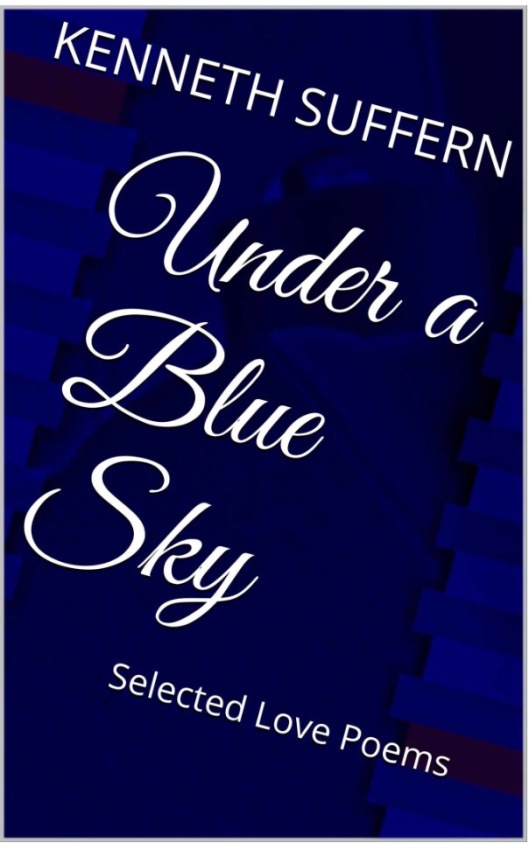 A walk, contemplated future,
Cover by night, I protected,
Dinner by candlelight, on the savannah,
The retold story, of our brief history,
END_OF_DOCUMENT_TOKEN_TO_BE_REPLACED

This piece is written in a-b-b-a-a-b rhyme scheme after reading Robert Browning’s “Childe Roland to the Dark Tower Came.” It is comprised if 11 six-line stanzas that are Iambic pentameter.

I
Begin with a greeting, Salutation,
Words to bring thee near,
Absolution of that fear,
The underlying meaning in Fa-shion,
The beauty coupled with temptation,
The future of holding you near,

II
Fate, less planning, nothing from above,
Brought your face to my hands,
We, both from different lands,
states, the journey of a flightless dove,
Uncertainty, of those words that hov-,
ering unspoken, trying to perfect messages poignant and less bland,
END_OF_DOCUMENT_TOKEN_TO_BE_REPLACED

3/7/12
First I would like to say thank you for the support. I am still a ways off from publishing my work, but this conduit has be a fun piece in the cog, and when I stareted this blog in support of my manuscript Blue Lines in June of 2009, I did not see today, or the wealth of work and experiences I would gather along the way. As my humble thanks, I offer an excerpt of my work from Blue Lines: Thirteen: Beauty in Blue and White:

END_OF_DOCUMENT_TOKEN_TO_BE_REPLACED

This Blue Lines excerpt is from Chapter 12: Chance. The scene takes place as our protagonist Key Yemaya Walker happens upon the antagonist Blue Hurt while he writes on a bus headed to the local mall. Though Blue Lines takes place in Chapel Hill at the University of North Carolina, the real life imagery starts with her chance meeting him on the bus, which was the public transit I and friends would take from the University of Bridgeport at the Main Street stop by our dorm Bodine Hall, to Trumbull Mall, now Westfield Trumbull. The mall used in the writing process was a amalgam of Trumbull Mall in Connecticut, and Lenox Mall in Atlanta, Georgia, or Buckhead rather.
As I always state, Blue Lines, is a piece of fiction that evolved from real events, places, and people, therefore elements of this selection, as well as the entire work contain real experiences, and events of the time period in which my manuscript takes place. I’ll be honest, looking over this selection, I may not leave it up, though the work is copywritten. Please enjoy, this early Christmas present.
Blue Lines Chapter 12: Chance

We got together, like, the first week of school and through this I have actually become accustomed to being alone. If he’s not at practice, he’s with his boys and the few times I see him, it’s always conversation about basketball or trying to get ass.”

“And the lack thereof doesn’t do anything for you two.”

“No,” she pursed her lips realizing that she had answered his latent question, “plus all the rumors,” she continued. “I confronted him and I know that he’s lying to me but I don’t care.”

“It seems like you keep mentioning that he isn’t around. Do you think that it would have been different if he was there and spent more time with you?”

END_OF_DOCUMENT_TOKEN_TO_BE_REPLACED

Circa 1994 at the University of Bridgeport

First, I have to say, my (female) cousin is trying to get us to bust some guns…I’d actually listen to her, lol.
Rather than repost, and rehash some of my original posts, I thought to give an enlightened 2011 view of things. Currently, I am in the final personal revision stage (because I have some limited material, and some material to delete) and then it will go off to a professional editor, for the final edits.

Honestly, to carry on yesterday’s theme, Blue Lines is my child. I have never officially pushed my manuscript to be published, because I was not ready for my child/daughter/son to leave. However, Blue Lines, has been previously been delivered to and editor. Granted at that time, the only current copyright from my manuscript was for the original 21 page work, not that current version or any of the original artwork (that has since, been updated).

None-the-less, I will set the scene for the first foray in publishing for Blue Lines. It was in 2009, around the same time that the organization the Atlanta [#####] that I was working for hit their first major milestone.

Circa August/September 2009 over fresh sushi a Sam Adams and wine at Thrive ATL.
“What do you do in your free time, when you’re not working for the [#####], [#####], or consulting in Los Angeles for the [######],” she asked.
“I write,” I simply smiled.
“About,” she asked interested, because we were friends, I was willing to embellish to some point.
“Well, I’m working on four manuscripts, however, I’ve begun finalizing a manuscript I began in 1998.”
“What is it about,” she continued, genuinely interested. END_OF_DOCUMENT_TOKEN_TO_BE_REPLACED

The following are a collection of readers thoughts of the prologue to Blue Lines. These are not my words, and forgive the formatting, I think that everyone who replied at that time wrote in capitalized text.

Reread last week’s blog for another interpretation of the Prologue from characters not associated with the manuscript.

END_OF_DOCUMENT_TOKEN_TO_BE_REPLACED

I really can’t wrap my head around this last week.

For lack of a better term, that best describes last week.

My manuscript that I had been working on since 1998 (see http://wp.me/pz9y7-a), the final tally of pages put it at 405 (370 abridged), was finally mailed to be shopped to be purchased / published.  As I posted last Tuesday, September 8th: