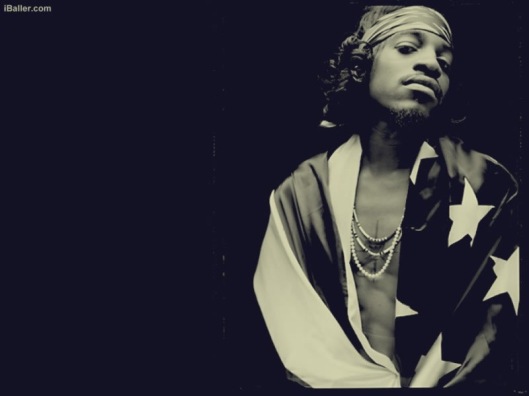 One for the money yes uhh two for the show
A couple of years ago on Headland and Delowe
Was the start of somethin good
Where me and my n—a rodes the MARTA, through the hood
Just tryin ta find that hookup
Now everyday we look up at the ceiling
Watchin ceiling fans go around tryin ta catch that feelin
off instrumental, had my pencil, and plus my paper
We caught the 86 Lithonia headed to Decatur
Writing rhymes tryin ta find our spot off in that light
Light off in that spot, known that we could rock
Doin the hole in the wall clubs, this s–t here must stop
Like freeze, we makin the crowd move but we not makin no G’s
And that’s a no, no

Yeah, uhh, check it
Ahh one two, ahh one two doe, n—as
in the Cadillac they call us went from Player’s Ball to ballers
Puttin the South up on the map was like Little Rock to bangin
N—as say motherf–k that playin, they payin
We stay in layin vo-cals, locals done made it with them big boys
up in dis industry, Outkast yea dem n—az they makin big noise
Over a million sold to this day, n—az they take it lightly
Ninety-six gon be that year that all y’all playa haters can bite me
…around this b—h
END_OF_DOCUMENT_TOKEN_TO_BE_REPLACED

[Verse One – Andre 3000]
My baby don’t mess around
Because she loves me so
And this I know for shooo..
Uh, But does she really wanna
But can’t stand to see me
Walk out the dooor..
don’t try to fight the feelin’
Because the thought alone is killing me right nooww..
Uh, thank god for mom and dad
For sticking two together
‘Cause we don’t know hooowww…
UH!

END_OF_DOCUMENT_TOKEN_TO_BE_REPLACED

Verse 1:
Yeah!
Inslumnational Underground.
Thunder pounds,
when I stomp the ground.(Wooh)
Like a million elephants,
or silver back
Orangutans,
you can’t stop the train.
Who wants some?
Don’t come unprepared.
I’ll be there,
but when I leave there.
Better be a household name.
The weatherman tellin’ us
it ain’t gon’ rain.
So now we sittin in a drop top,
soaking wet.
In a silk suit trying
not to sweat.
Hittin’ somersaults with-
out the net.
But this’ll be the year that we
wont forget.
1-9-9-9!
Anno Domini,
anything goes!
Be what you want to be,
long as you know
consequences
are given for liv-
ing the fence is,
too high to jump in jail.
Too low to dig,
I might just touch hell.
HOT!
END_OF_DOCUMENT_TOKEN_TO_BE_REPLACED

[Cee-Lo]
Mmmm.. this particular song right here is..
dedicated to the black woman
And it doesn’t pertain to all black women
because some of y’all disrespect y’allself
because you don’t know who you are in the first place
This is out of common respect, for all women period
Word up, like this song, yo

Yo, I’m quite single, and occasionally I mingle
But aside from all the rest, she sparks my interest
No, ma’am, I don’t know you
Just offering the common respect I feel I owe you
Also, some conversation, companionship, common-ground and common-sense
There’s no such thing as coincidence in, me finding you here
And I really hate screaming in your ear, so some other time, OK?
I waited a day *phone rings* Hello?