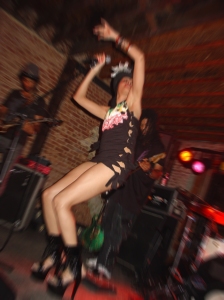 It’s so hard to pick just one.

It took quite some time to gather the right thoughts to make this post. Joi Gilliam, Joi…Joi is virtually the best artist that for some reason the masses has not heard of. Now what do I mean by that? You’ve heard her music often, but you may have not known it. Not to compare her, or to say that she created a music movement, but before you (music listening public) had Erykah Badu, Jill Scott, etc., there was Joi.
In 1994, before I left Atlanta and Georgia I first heard the Tennessee born daughter of Pittsburgh Steelers Quarterback “Jefferson Street” Joe Gilliam, Joi’s, classic, “Sunshine& The Rain,” on community radio in Atlanta (“urban” radio stations here would not play Hip-Hop, nor anything thing that was not a national R&B standard, therefore Atlanta natives Outkast, and non-MTV songs by TLC, or Kriss Kross (given for effect) would not make it to local radio). As I often discovered with independent radio, I would find a new song, but it was highly unlikely I would find out who the artists was. Armed with this tape recorded song, I pumped this unknown artist all the way from Atlanta to New York and Connecticut.

Luckily, Joi’s work was released and I remember walking into the Sam Goody’s F.Y.E. concept store in Trumbull mall and seeing the new release wall, and Joi had her entire placement of her debut, The Pendulum Vibe, there. Not knowing that this was the artist I had been bumping, I was always inclined to try out new music, even without having heard it (I returned home after my 2 years in Bridgeport with over 1K CD’s of music, all catalogued in a notebook). Well I picked the CD up, and saw the title “Sunshine & The Rain,” I felt like I had won the lottery, first I had a full length album of an incredible artist that I only had previously had a partial taped song, and a real artist was given the opportunity to put her work out. I walked around that store, until our group left clutching the $18.99 compact disc until it was time to check out. I dropped the disc into my Sony Discman on the way back to campus, and had my first true magical experience with her music. My life was changed. I own, 3 copies of the album, and have purchased copies for friends before it went out of print.
END_OF_DOCUMENT_TOKEN_TO_BE_REPLACED

“…you ruined me, I don’t want to settle for anything else…”

A quote you will see in both major Blue Lines Blog posts this week, but I will get to that in some time.  This week was eventful that the “e-mail” that I have been vaguely mentioning very often in these posts came in 2 very different incarnations over the last 3-4 weeks.  Both transmissions, said two totally different things.  Subsequently, after learning a new type of patience, I do feel that I still have much to learn, that the 2007 – 08 version of myself would have learned much quicker, or should I say that version of myself was more grounded.

Unfortunately, the message I received was shocking, as it was unexpected, and after the work I had put in, the level of surprise was that much more intense.  While I sat bewildered, shocked, surprised, angry, annoyed, saddened and depressed for a brief time, that was a first for me (the depression), my fight or flight responses were on edge, as I had previously scheduled plans, that I had a big role in making happen, therefore I could not disappear…for an evening I had to hide in a public setting, which was both fortunate (I was not left to my own devices to possibly sulk), and unfortunate (I needed some time to clear my mind and thoughts).

Luckily I was afforded time to reflect on the entire situation the day after.  As I sat back, with the information still freshly imprinted in my mind, I thought of how I was leaving my decisions to this one piece of information.  Yes, in part I had made other choices as they pertained to this piece of information, but instead of the plan being a direction I was heading in, it was contingent on the perceived answer/outcome…between BBM messages between a good friend and I, the overriding tone of the day was “focus.”  Items that crossed my mind, “my continuing process of getting in my way,” “decisions contingent on myself,” “alignment with my goals,” Blue Lines, my future.