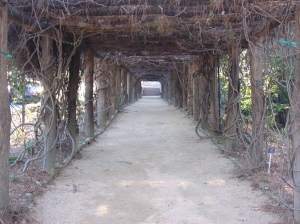 Music was very influential and easily supplemented the mood as I made the attempts to relate both the mood of the characters and paint the scene.  When I initially began this project in ’98, my main soundtrack was Joi Gilliam’s (http://joilicious-online.org/home.php ) 1994 The Pendulum Vibe and the sampler of the unreleased classic Amoeba Cleansing Syndrome (damn Rowdy and Freeworld records).  But as I continued to write, there were times that simply hearing a song at a specific time, or for the first time spurred me to write.  While on a 1999 road trip somewhere between Fargo, ND and Spokane, WA, a friend played the song “Jóga” by Björk in his car cassette player (yes, remember those) and I, for the first time, heard this song and grabbed any piece of paper around me in the car to start writing anything to add to my manuscript.  It was the powerful effect that hearing the song for the first time inspired me to write.  Much to the chagrin of the driver, I repeated the song several times until I was told that they did not want to dislike the song and that we had to move on.  Similarly, upon making the return trip, we were listening to local L.A. radio as we took I-10 to return to Atlanta just before I ended up in some place called Blythe (where we had to order some Domino’s Pizza, and eat it on a bench in front of the store in an empty shopping center, when Mary J. Blige’s “Sincerity” feat DMX and Nas was played.  Whoa… I was taken by this song, and the message was of the concept of love, at the very heart, a very central theme in my manuscript.

These examples were taken from very early in my writing process, also, less than a year into the life of this manuscript which I had started in earnest in 1998.  As I continued and the manuscript and story began to take shape, I noticed that more frequently I would hear music that would elicit such a creative response.  I was drawn to writing new material, or adding more substance to existing or weak scenes.  From there (in the pre-iPod days) I began to take these songs that noticed would inspire my writing and started to put together a playlist suited to the work.  I tried to keep the music that I used from that general period from around late 1996 through 1999, but writing for the extended period songs that have released before and after this period also fit, simply based of the inspiration that they provided.  Another major hurdle, in hearing new music primarily on film, was to allow for it to work for my manuscript, and not be influenced by any format that I saw it used in i.e. “Take Off Your Cool,” by Outkast was released on the 2003 double album Speakerboxxx/The Love Below, but was later extended into the love scene of their 2006 film Idlewild.  Although I had used it for inspirations for the numerous revisions I had made over the years, I had to refrain from revising for fear of inadvertently stealing content from the film.

Key Songs in my writing process (that have not been mentioned above) If you are reading on Myspace, some of the songs are in the Myspace player:

“Memories” – Joi: From the 1994 album “The Pendulum Vibe,” one of the first songs that I would listen to while writing, it is an upbeat and lighthearted song that was a reminder of my first attending college.  It served as a constant gauge of the tone and spirit of the work, early in the development of the story.

“Butterfly” – Tori Amos: A song from the 1995 soundtrack of “Higher Learning.”  Used in the film for a totally different chain of events, my usage of this song for inspiration spawned initially from wide differences of music and the rising genre of College in the early 90’s that one would experience on a college campus.  As my story progressed, this song found its place as it opens Chapter 26: Clearing for Revelation, as my main character marveled at the previous chapter’s recent events while immersed in “Peaceful moments as such were what she longed for.  Her release was found alone in the splendor of nature.  Her lips grew into a wide grin as she mindlessly became consumed by the weather.”

“You Move Me” – Cassandra Wilson: Keeping with music used in film, this work from the 1997 soundtrack of “Love Jones,” again fit perfectly into a scene that frames the beginnings of our protagonists’ relationship, if you will.  Fitting within Chapter 17: Discovery, the lyrics “rain falls down on me, I can hardly see, for the water in my eyes.  Love comes down on me, I can hardly breathe, for the trembling in my thighs…you move me,” complete the scene both figuratively and literally (sorry for being so vague).

“Black” – Pearl Jam: a song from the 1991 album  “Ten” that I randomly listened to around the time that this album was released during my years in high school was a major focal point both in writing, and in some changes and turns in the work.  Returning to Chapter 8: Words Speak The Truth (mentioned in my test blog), the reader is taken to a poetry reading at which the protagonist, and our antagonist are present.  As the scene moves on a pivotal conversation takes place between our characters and this song plays as a backdrop for them, as it is performed behind them in the same venue.  “…I hope someday you’ll have a beautiful life, I fuckin’ hope you’ll be a star in somebody else’s sky, but why, why, why, why can’t it be, can’t it be mine…” Using an interpolation of the adlibs in both, easily accessible, live versions (Dallas 2003, Tokyo 2003) the mood of the chapter is encapsulated by the performance of this song by a cover band.

The manuscript Blue Lines is a fictional period piece that takes place at the University of North Carolina at Chapel Hill between the years of 1997 – 1998.  Loosely based on true events, and experiences during that time, told through the eyes and voice of the main female protagonist, a freshman first attending the school.